7 Historical Landmarks In Malaysia You Must Visit 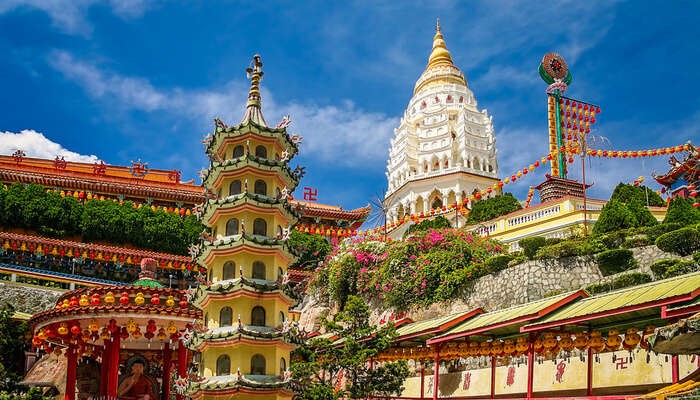 Malaysia is a cosmopolitan country with many ethnic groups that make up the country. It is this diversity that draws tourists from all over the world to experience different cultures and cuisines in one place. The country is well developed with amazing shopping centers, ultramodern office blocks, and excellent connectivity. The road, air, and train services are the envy of the surrounding nations. It also offers nature lovers stunning scenery, rolling hills, fauna-rich jungles, and islands ideal for honeymooners and other tourists.

Since Malaysia was under foreign occupation, it has structures that reflect the culture and architecture of the occupying forces. As a result, the country is dotted with historical structures and dozens of sites that are a tourist delight. There is a lot to see in Malaysia, and it would not be possible to cover all the tourist spots. However, there are seven historical landmarks in Malaysia you must visit:

This fort is located at Jalan Syed Barakbah. It is called “Kota Cornwallis” in Malay and is considered one of the most important historical sites in Malaysia. In fact, it is recognized as a UNESCO world heritage structure. Fort Cornwallis was built to defend Penang from pirate attacks. This fort was named after Charles Marquis Cornwallis, who was the Governor of Bengal. The fort has a bronze statue of Captain Francis Light and houses the soldiers’ barracks, munitions storages, and prison cells. Cannon guns were mounted on the ramparts while tour guides dressed in British uniforms are available.

Christ Church is nestled in a by lane with quaint little shops selling Knick-knacks. It is recognizable by its reddish color, with a white cross displayed prominently on the façade. This protestant church is still functioning and receives many worshippers during the services. The Dutch styles influence the architecture, and the church bell has “1698” inscribed on it. There are also several tombstones on the flooring of the church with Portuguese and Armenian inscriptions. Photography inside the church is prohibited.

The Melaka Sultanate Palace Museum is spread over three levels and consists of eight chambers. Each chamber has artifacts like weaponry, decorative artworks, brassware, intricate jewelry and other types of display articles. Three galleries portray the heroic clashes between legendary Malaysian warriors like Hang Jebat and Han Tuah. The museum features more than 1350 artifacts and photographs of the period of the Sultanate’s rule. It has a throne room and a royal bedchamber, and other items from the royal household. Visitors can have a glimpse of Malay apparel that have historical significance. It also houses the weapons used by Malay warriors during the Sultanate’s regime.

The Penang Snake Temple was built in 1805 in memory of Chor Soo Kong, a Buddhist priest, and healer. It was earlier known as the Temple of the Azure Cloud. Here, visitors can get close to venomous snakes without the fear of getting a fatal bite since they are de-venomed and defanged.  It was previously known as the Temple of the Azure Cloud. Chor Soo Kong was a healer and used to heal the wounded and sick. His house was a haven for snakes which appeared mysteriously after the area was consecrated. It is a magnificent structure with intricate carvings and has a beautiful pond on the premises.

This church is located on the summit of St. Paul’s Hill and is considered one of the oldest churches in Southeast Asia and Malaysia. The church was built in 1521 and is presently a part of the Museum complex. It has engraved tombstones, a St Francis Xavier statue, and an imposing bell tower. It was built by Duarte Coelho, a Portuguese captain in honor of the Virgin Mary for saving his life during his voyages on the high seas.

This is a famous Portuguese fortress that was once the center of the Portuguese administrative officials. The only thing that remains is the façade which has an amazing design. In fact, this façade is a popular stop where tourists take pictures with the façade as background. The fort consisted of long ramparts and had four major towers. It has a storage room for ammunition, captain’s residence, and officers quarters.

The Sri Maha Mariamman temple is a Hindu temple that has intricate carvings in Dravidian style. It is dedicated to Goddess Parvati and is one of the oldest temples in the city. It was made specifically made for the Tamil population. The temple attracts huge crowds during the festivals like Diwali and Thaipusam. The devotees carry milk which is offered to Lord Muruga.

Malaysia is a trove of attractions that offers something for everyone. It has bars, nightclubs, theatres, art galleries, sporting events, and much more. In addition, the country has historical sites all over the country and beautiful, evergreen scenery for the serious traveler. Commuting around Redbus Malaysia is safe as they follow Covid protocols strictly. You can book bus tickets online.