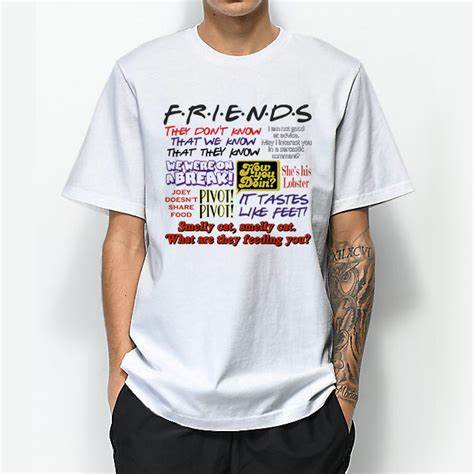 FRIENDS is one of the best TV shows ever. Not all sitcoms (situational comedy TV shows) have been as popular as Friends. It probably showed the only thing you could ask for in your 20s and early 30s – a close group of friends and hanging out with them every time you can.

Well, the show had a great impact on viewers around the world. Even though the show has stopped airing about 16 years ago, people still talk about it. They wear Friends t-shirt and give reference to their favorite moments on the show.

If you are a “FRIENDS” fan here are some things that you can own to show your love for the sitcom.

1. The TV show itself

Well, if you think again, probably the best thing that you can own is the TV show itself. You can buy The Friends: Complete Series Box Set. It has more than 110 hours of content – 90 hours of special features and 20 hours of bonus content.

In addition to the 236 broadcast episodes which have been re-mastered in widescreen, you can go behind the scenes with three new documentaries and cast interviews. You can catch up on talk show appearances and a lot more. Along with printed t-shirts, this can be a great thing to own.

If you are a Friends fan and you want to have merchandise, buying a simple men’s t-shirt will be a good idea. You can buy a men’s t-shirt with Central Perk logos or something that is a reminiscence of a dramatic Friends’ moment.

Monica’s apartment and Central Perk coffee house are the two locations that probably feel the most nostalgic. Fans even know Chandler and Joey’s apartment like the back of their hands. You can find plenty of t-shirts online that depict scenes from your favorite episode.

Considering that most of the amusing discussions in Friends would happen in Central Perk and that’s where your favorite characters got coffee, how about a coffee mug with a Central Park logo? Doesn’t that sound exciting?

The oversized and odd coffee mugs made the show much more amusing. If you want to have cool Friends merchandise, the coffee mug is a great thing to own. You can find mugs that are dishwasher and microwave safe. Though there is an official and licensed, oversized Central Perk coffee mug, you can pick one if that’s what you like.

4. The One With All The Recipes

Probably the best thing you can own as a Friends fan is an unofficial cookbook containing all the recipes that have been shown in Friends. When you are hosting a party at your place, you can treat your friends to some of the most memorable recipes from Friends. However, it would be better that you steer clear of the meet trifle. There is also the Engagement Ring Lasagna. There are also lots of other things to try from – appetizers, lunch, dinner, breakfast, and drink ideas that you might like to try.

These are probably some of the best things that Friends fans can own.